For Christmas, from my parents, we received a G5 George Foreman Grill. 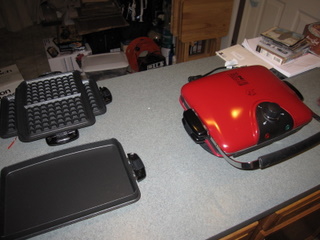 It came with 5 interchangeable plates; and after the holidays, we purchased two more – the omelet plates. We now have 7 plates and about 4 different combinations:

#1: Grill plates. Anything you want to drain fat off of is best cooked on these. I find that it doesn’t drain as well as I would like with it set to the highest tilt setting, so I add an upside down drippings tray behind the back support and then it drains perfectly. We grill chicken pieces and 2 lb slabs of ground turkey on these grill plates the most. We tried something a little different and cooked some tater tots the other day. I call them tater squats since the heaviness of the top plate squished them – but they were still really good and crispy too. 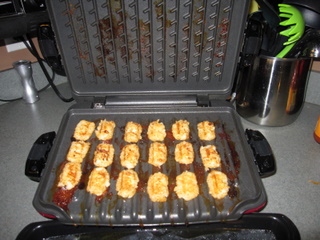 #2: Waffle plates. This is an obvious one. It makes waffles. We make organic whole grain waffles that come out beautifully. Heat the grill on high until the green light goes off. Fill with batter according to directions – I think it says 1/3 cup and I use that on each side. Close. The green light will come back on shortly and then when it goes back off the waffles are done. I think it takes about 3-4 minutes for them too cook. Much better than my Waffle Maker which is going bye, bye. Any takers? 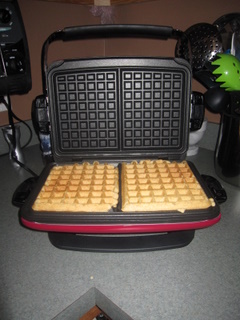 #3: Flat plate. We have cooked tater tots on it so far. But the booklet says it can make pizza, eggs, cookies, biscuits… well, just about anything you can cook in a pan where you don’t need the fat to be drained. We plan to make corn bread on it next and see how that goes. I would love to try pizza. With this plate orientation, the flat grill goes on the bottom and then the top grill/steak plate goes on top. In the picture below, the top omelet plate was used since I wanted to see if it would work too and it did. 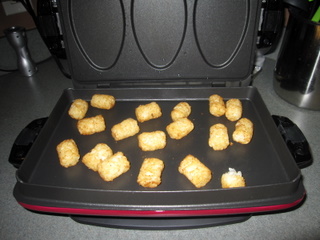 #4: The omelet plates. These have to be the coolest plates. So far, we have made egg white omelets and brownies. Making omelets on this grill has to cut breakfast prep time in half. I saw in the booklet that brownies could be made, so I HAD to check it out. I mixed up the batter like usual and filled the 3 reservoirs to the top (should have put a little less but it still worked out) and closed the lid. I think it took maybe 9 minutes and they were done. They are about twice the size of a normal brownie, so serving size would be 1/2 of one of these. Also, if the reservoir was filled only 1/2 way, the brownie would have a really nice curve like the 3rd picture below that was the last of the batter – just about a serving size. As I was taking them off the grill and putting them in a container, my husband told me how appropriate they were for the day we were making them. We aren’t football fans and we made them on Super Bowl Sunday – and they look like footballs!!! Almost like I did it on purpose but I definitely did not. These really would be perfect for football fans with some white icing for laces. 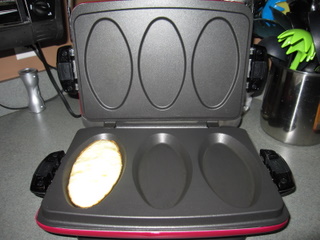 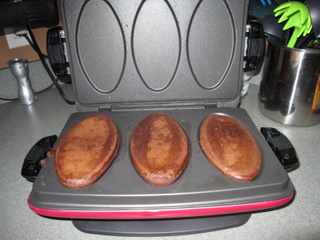 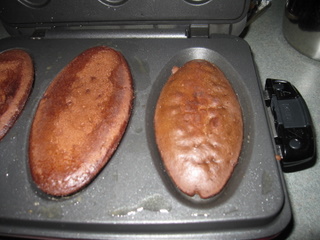 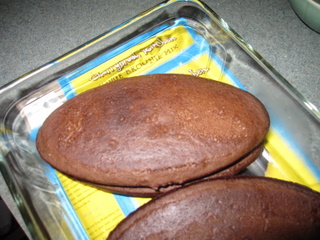 So, I highly recommend this grill. The energy savings alone is worth it and it varies in the time it saves depending on which plates are used. It would have taken 10 minutes to heat up the oven and then another 15-20 minutes to cook the brownies. This way it took 5 minutes to heat up the grill and around 18 minutes total to cook the two batches of brownies. I can’t make a $ savings equivalent since I don’t have one of those energy calculators for electrical outlets YET, but I know there is definitely a substantial savings between heating a small grill and heating a standard sized oven.

If you are looking for an easy way to cook stuff, this is it. Within 5 minutes, it is warm on high and cooks fast too. The practicality far outweighs its only negligible shortcoming I have found so far. If you aren’t used to the interchangeable plate type grills, the plates take a little getting used to but once clicked in, they are secure. I have used this type for a while and I think it is easy once you get used to how they fit.

I think if we lived in an apartment, a small space where we couldn’t have a kitchen, or were remodeling a kitchen, this would be one of my top 3 items along with a microwave and fridge. One of the best gifts we received for Christmas!

Photo of my handmade ladder being used in my new apartment in May 2016. This post below was written by me in February 2015 on my private blog and brought over to my public blog in May 2016: Handmade Ladder Many, many years ago{…

There are still more things to go, but this is Day 30 and the conclusion of this month’s Minimalist Challenge Game. It was so much fun to use a game to help me let go of items I was having a hard…

I have a jewelry compartment organizer full of jewelry I don’t wear – well, not anymore. I went a bit of it a little while back, a bunch today, and more tomorrow. Why keep it when I am not wearing it and…