This year for Christmas I was planning on making my friend’s children pillow case covers with their favorite things right now, but ended up running out of time. So, I was looking around Michael’s Craft Store for some inspiration and something I could do rather quick but would still be well received. I remembered that my friend was using paper ornaments this year for her Christmas tree due not wanting her ornaments broken (the children are 1 & 3). I found some wooden figures that I thought I could turn into ornaments with some wire and hotglue. With the selection I had, I chose what I thought they would like. A butterfly and dog for the girl and a turtle and train for the boy. I thought that even if they do get broken, they are wood and can easily be glued back together. 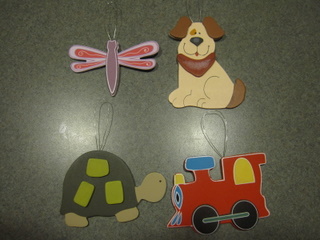 Update: Shortly after the holidays, we went to see my friend and her husband and gave her children the ornaments. They were sweet at first and looked like they liked them. They were put on the tree and all was good. Until their son swatted at the one playing with it and then their daughter proceeded to swing at them all and throw them to the floor one by one – they did not get broken! I would have normally taken some offense and thought they really didn’t like the ornaments, but hopefully this behavior of  “removing” the ornaments is why my friend did not put her good ornaments on the tree. Once they went up to bed, I casually walked over to the little beaten down ornaments, made sure they were okay, and placed them back on the tree. Maybe tomorrow will be a better day for the ornaments?

One of my January goals is to start making and selling necklaces on Etsy. With all new ventures, there is start-up involved. My start-up involved: beads, wire, and a way to organized everything. I purchased new materials and made 3 new necklaces to list…

After a few months, I finally got back to organizing my scrapbook station in the living room. I was able to remove the green canvas bins like I wanted. I found some pink plastic containers and little glass bottles in my container bin in…